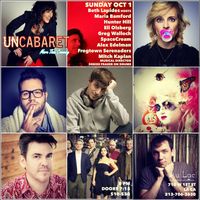 We're excited to play a few songs as part of this great show!
UnCabaret is a legendary venue for wildly fun, idiosyncratic, intimate, conversational comedy. A place for comedy luminaries and their musical muses. Live on Sundays in residency at Au Lac DTLA and on Amazon.com, sirius, NPR, Comedy Central.

An intimate night of story based comedy. Los Angeles Magazine recently named this long running show one of the top 5 comedy clubs in LA.

Au Lac is across the street from Disney Hall. On the corner of First and Hope. In the plaza with the Bikram Yoga. We are in a private, groovy showroom in the back. They serve world class plant based cuisine. If you don't feel like eating dinner, there's a full bar with organic choices plus kombucha on tap and various coconut and green drinks. Plus a desert menu. And popcorn. But the full dinners are delicious. You can eat in the restaurant before hand and carry over your tab. Or you can eat in the cabaret room during the show.

Show at 8. Doors 7:15 Restaurant open throughout the day.

Parking is under the venue. $1 with validation for 2 hours $7 for the whole night

An intimate night of story based comedy. Los Angeles Magazine recently named this long running show one of the top 5 comedy clubs in LA.